I've done photo a day twice before. I originally heard about the idea of taking a photo a day sometime before October 2007. I had read an article about Jeff Fatt, the purple Wiggle, and he had taken a photo of the most eventful thing that happens each day since 1990. "It could be a person he meets, a meal he eats or something on TV."  If I do a bit of a google, I suspect it may have been this article from The Daily Telegraph on September 2, 2007 (link)

As my 39th birthday approached I came up with the idea to take a photo each day of my 40th year. And so I began a project that would run from October 2007 to October 2008.  I faithfully took a photo every single day from the day after my 39th birthday to the day of my 40th birthday. It was fun and I love looking back on that year. Some days were easy; days when there was something unique or photograph worthy happening. Other days were routine and more difficult. I'd wander around my house looking for things to capture. I didn't miss a day though.

A few years later I decided to do it again. The year was 2010 and I decided to take a photo a day featuring a troll doll. Yes, you read right, a troll doll. My aunty collects them. She has thousands and I am not exaggerating. This pic below shows part of one wall in one of two rooms she has that trolls line the walls in.

Our whole family is on board with her troll hobby. Just this past Sunday I was at a trash and treasure market and I came across a couple of them. They were packaged up with My little pony's, but I left the pony's and took the trolls at $2 each. My aunty is the easiest person in the world to shop for. Just find something troll related and you're on a winner. Here is a snapshot of 3 days from my album that year.

In 2010 I always seemed to have a troll doll on hand. I started off wanting a different troll in each picture but it grew difficult to get some of them from my aunty so I just stuck to rotating a few amongst the different photos.

So, after dipping my toes into Instagram last year and seeing posts tagged #fmsphotoaday I decided I would do a new photo a day project for 2014.  This time I'll be using Instagram and taking the photos using my smart phone. I'll also be using the prompts from Fat Mum Slim. 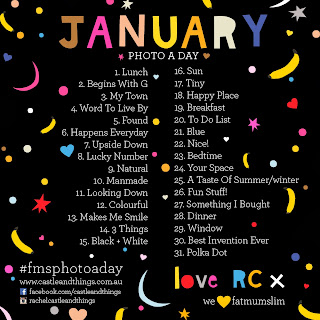 If you're curious about photo a day, or want to see what I am photographing throughout 2014 please pop by my Instagram account. @primmich1