There's no trade week for fans

I've blogged about a variety of topics here but not football, that I can recall. A blog post is usually triggered by something that affects me emotionally...something that causes words and thoughts to float around in my head, desperate to get out and yesterday football triggered that. It's a bit romantic, and I know football is big business now and I'm a little naive to all the machinations...but here it is.

[Note: I wrote this before Brendan McCartney, the coach, resigned]

I was home with my sick son. We were watching a movie and I was scrolling through twitter on my phone, when a bombshell tweet in the @afl feed rocked my socks. 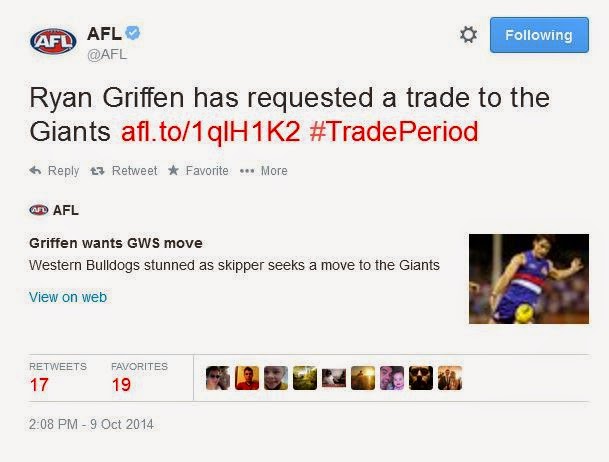 The very fact that it was on the AFL twitter account was enough to cause concern as it gave it authenticity. I gasped and my son nervously asked, "What?.....What?" I could barely bring myself to say the words. He has No.16 on his football jumper. "Griff wants a trade". He joined me in shock. Just days earlier we heard speculation that Adam Cooney, our Brownlow medallist, was being considered for a trade and prior to that Shaun Higgins and Liam Jones. Football is pretty brutal when it comes to player movements but some players are at the core of the club, well, I thought they were. Gone are the days when being a one club player was almost the pinnacle, behind being a premiership player I guess. It just feels so.... brutal. I was reminded today of the 20c that a young fan sent to Chris Grant to lure him to stay a Bulldog.  He's considered a legend these days.

I'm a footy chick. I always have been. I've followed Australia Rules Football since I was a tween. I would draw up team lists and listen on the radio or watch the replay (they used to do that - show a replay on Saturday night of one of the Saturday afternoon games...when ALL the games were played on a Saturday afternoon). While I watched (or listened) I'd mark the goals and behinds against the relevant player. I'd cut articles from newspapers and sticky tape them into scrapbooks.

My husband and I would go to Footscray games in the early to mid 90s and we'd take his elderly Dad with his thermos and packed lunch. My husband tells a story of being at the Western Oval (now Whitten Oval) when the club was on its knees being forced to merge with Fitzroy back in 1989. He saw his pensioner Dad open his wallet, and moths flew out, but he threw some dollars in the collection tin to help save his beloved Doggies. Up until his death, my father in law had a framed news article on his mantle. It said "There are 3 certainties in life: Death, Taxes and The Doggies in the Wet", alongside this was a framed picture of Tony Liberatore; his favourite modern day player. He loved the Dogs, and that love had been passed to his son, and now it has been passed to our children.

Footscray became the Western Bulldogs in an effort to appeal to a wider fan base and we accepted that change. We were signed up members from about 1996, and in 1997 saw the club on the brink of success. It was an incredibly exciting time. The club had only ever won one premiership, in 1954 and its only other Grand Final appearance was in 1961. The Dogs were not a powerhouse. There was no cabinet full of silverware, but the fans were devoted and loyal...they still are. In 1997 we could almost taste success. We were at the infamous preliminary final that year. It is such a vivid memory. The excitement at three quarter time when we began to believe we might see our team in a Grand Final... How would we get tickets? Then the cruel unravelling, as Adelaide powered home and we suffered the most painful of losses, by only 2 points. We wept real tears that day. We were stunned, and to this day the Adelaide theme song haunts us.

I have tons of football memories. I have pictures of players holding my children as babies, and my kids attending clinics on Whitten Oval, or standing with their paraphernalia at games, and school footy days. We didn't really give them a choice about football. We signed them up as Bulldogs members and dragged them along; kitting them out in red, white and blue. We live in Geelong. It's a tough gig to not support the Cats when you live here. People don't understand how we can live here and not support the local team and its hard to explain, but we feel we have red, white and blue running through our veins. The kids have seen some success, but not the ultimate success. A few years ago we planned our September school holidays around the likelihood of the team being in the finals, but the current team is rebuilding and struggling. It can be demoralising being at games when your team isn't doing well but we hang in there. We've stayed members all through this. The club labels us Bulldogs for Life, as they deduct payments from our account each month. With all the various commitments that a young family has we don't get to many games, but still we do it. The membership feels like a donation, but still we do it. I don't have regular employment at the moment, but still we do it.

This post has turned into a family history about the Bulldogs and that wasn't my intention. I guess I'm giving some background to our family commitment to the Dogs. We love them. We've been through thick and thin, and we're still here.

There's no trade week for fans. We don't have a two week period at the end of the season when we consider the membership options of rival clubs. Where can we get a better financial deal? Which club has the most appealing package?  Where will the games be played? We don't have a look at the teams in the Premiership window and consider jumping on board to taste success. We stick. We're true. Coaches, players, administrators come and go. We stick. We're here for the long ride through all the turmoil; as a player we love, a player who has captained our team, endeared himself to our kids, announces he wants out. And we're entitled to be angry, and sad, and tearful. We may even threaten to tear up our membership in the heat of all that emotion...but we don't. We stick. We have no real power. The club needs us, and we need them. Our frustration leads some to rant on Facebook or Twitter...or to write a long rambling blog post with no real purpose except to be a small voice for the fans.

Fans are the backbone of clubs, and I know the Western Bulldogs fan base does not compare to teams like Collingwood and Hawthorn in number, but in passion, we rival any team. We love our club and we hate to hear that there are tensions, or issues that can't be resolved. What can we do? It feels like the only time we have power is when the club needs money. Without the fans, there would have been no Footscray, no Western Bulldogs after 1989... But otherwise, we watch from the sidelines, Bulldogs through and through, as coaches are sacked, or resign, players walk, or get dumped, new players come along, new hopes are ignited and we endeavour to #bemorebulldog, even though we're SO Bulldog it's a wonder we don't bark.