On Saturday February 22, 2014 we joined 500,000 of our closest friends in the heart of Melbourne and attended the White Night Festival. It was amazing. I don't think we quite knew what to expect as we drove into Melbourne, pondering where we might park and where we might start our explorations.
As it turned out we were able to park near the Queen Vic market and then wandered down to the State Library. We instantly knew this was huge. There were people everywhere. We had our 12 year old and 10 year old with us and felt like we should have written our phone numbers on their arm in the event we were separated. The art work on the exterior of the library was fantastic. It was still dusk so not pitch black as yet but the effect was quite amazing.
We saw a queue forming and decided to join it and see what was happening inside the library. Working out where the queue started and where there were just people milling was a challenge but eventually we seemed to be moving in the right direction and though it seemed like it would be a lengthy wait it wasn't too bad. Walking into the domed centre of the library was eye opening. The musical accompaniment seemed perfect. Projections of familiar viruses where all around us, moving with an eerie presence, but fascinating all the same. While we stood and photographed and took in the various displays we saw HIV virus, common cold, human papilloma, herpes virus, gastro...these snake like virus cells crept and wove around the room. It was captivating...along with the statistics of numbers in the room likely to have the different viruses.
After leaving the library we decided to make our way down Swanston Street. It was going to be slow going! Every little while we'd approach a busker and the crowd would slow to an absolute crawl. If the busker was on the right we'd have to make our way to the left and vice versa... When you were eventually past these musical and comedic interludes it felt like a breath of fresh air as you had a little patch of space without body on body contact with strangers. But as we moved past them we got caught up in their act, bopping along to their rhythmic tunes, or trying to listen to their voices projecting a performance. The kids were a little frustrated at not being able to see the acts, but we could certainly hear them. One particular act seemed to be moving right alongside us. They had flashing neon signs and boom boxes on their shoulders. Their boom boxes seemed to be on the same frequency, all playing familiar songs. We weren't standing and watching an act, we felt part of it...part of the rhythm of the festival as it evolved around us.
On reaching Bourke Street we took a small detour. We could hear jazz tunes and made our way into the mall. Great sounds were coming from the stage and we crept in behind the band.
We were all hungry and it felt like we needed to get off the street to sit and enjoy a meal so made our way into Pancake Parlour...a winner for the kids, and absolutely buzzing with the crowds. I'd like to say we had tried something more exotic than pancakes but it was not to be so.
Before long we were back out into the street, the crowd seemed thicker if possible. We grabbed a hold of each other to make our way through and back toward Swanston Street. In an amazing coincidence we bumped into a work colleague of my husband. 500,000 people roaming the streets in dense crowds and here was a familiar face! It was amazing.
The walk toward Flinders Street was slow. We stopped to admire a balloon busker, who seemed to manipulate balloon animals without even looking. We were keen to get to Flinders Street Station...one step...pause, wait, move to the side, another step, smile, push to the side... eventually we made it and wow, it was spectacular. Yes, the crowds were annoying, but in another way they made it. We knew we were a part of the biggest crowd we had experienced in Melbourne. It seemed to be a part of the experience, if only they'd all sit down so I could get a clear photo of the station without heads in it!
We had fun taking selfies with the lights behind and ooh and aah-ing as the art work changed but we knew the kids were beat. It was a fabulous environment...a real festival of people as much as art and music and we did feel like we'd absorbed it and experienced something unique...but the kids were weary so we made our way to the train to loop it around to Melbourne Central and then a walk to our car for the journey home.
As much as the crowds were a part of it, my main suggestions would be:
I missed a ton of things I'd heard about that I would like to have seen...the tattooed city, the purple rain, the synchronised swimmers...and they're mostly the high profile ones... I'm sure we missed a ton of things with lesser known features but just as entertaining and enthralling.
Here's a link to the official website. They're already talking about 2015 so it seems it will be back :)
White Night Melbourne 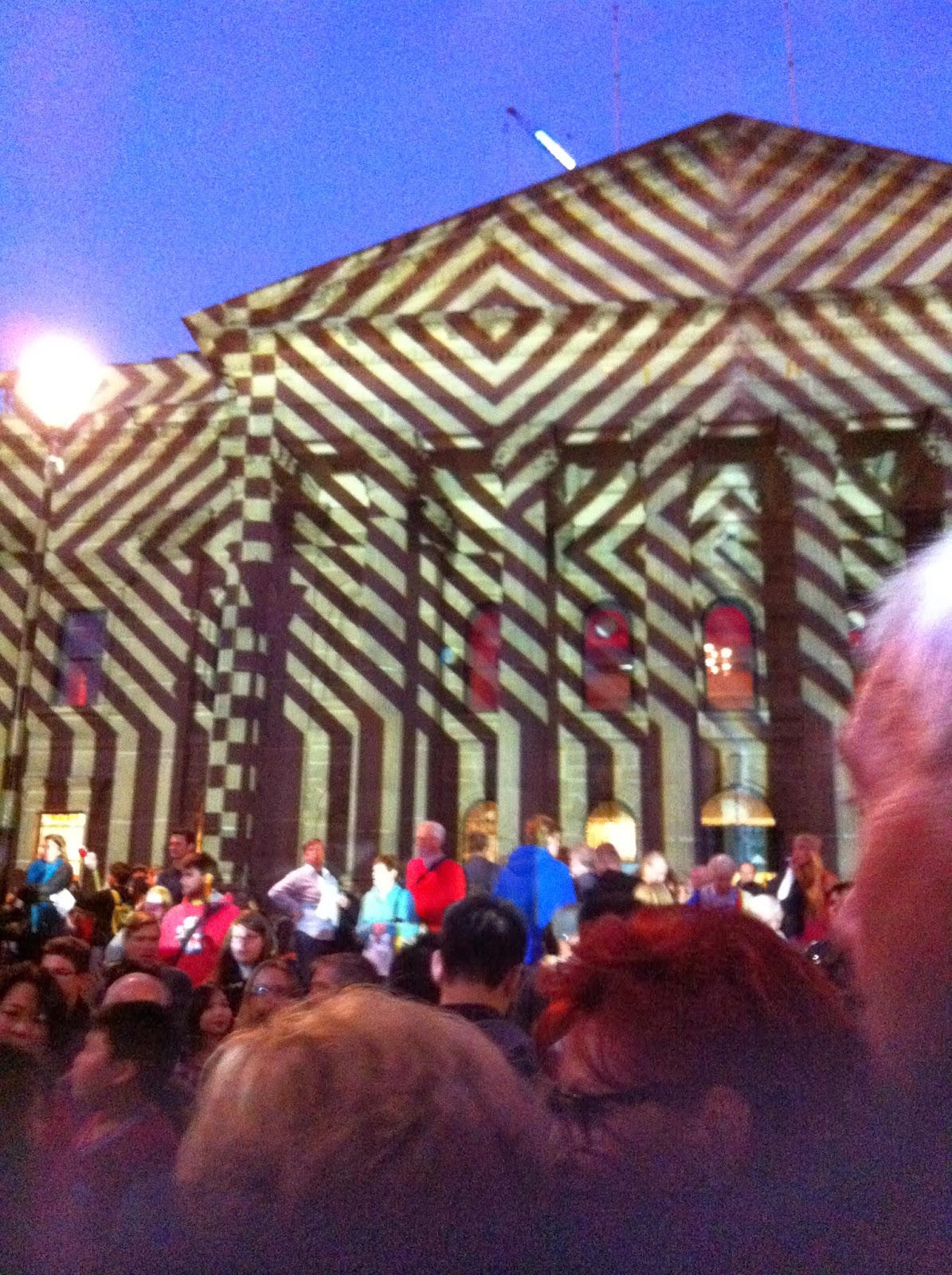 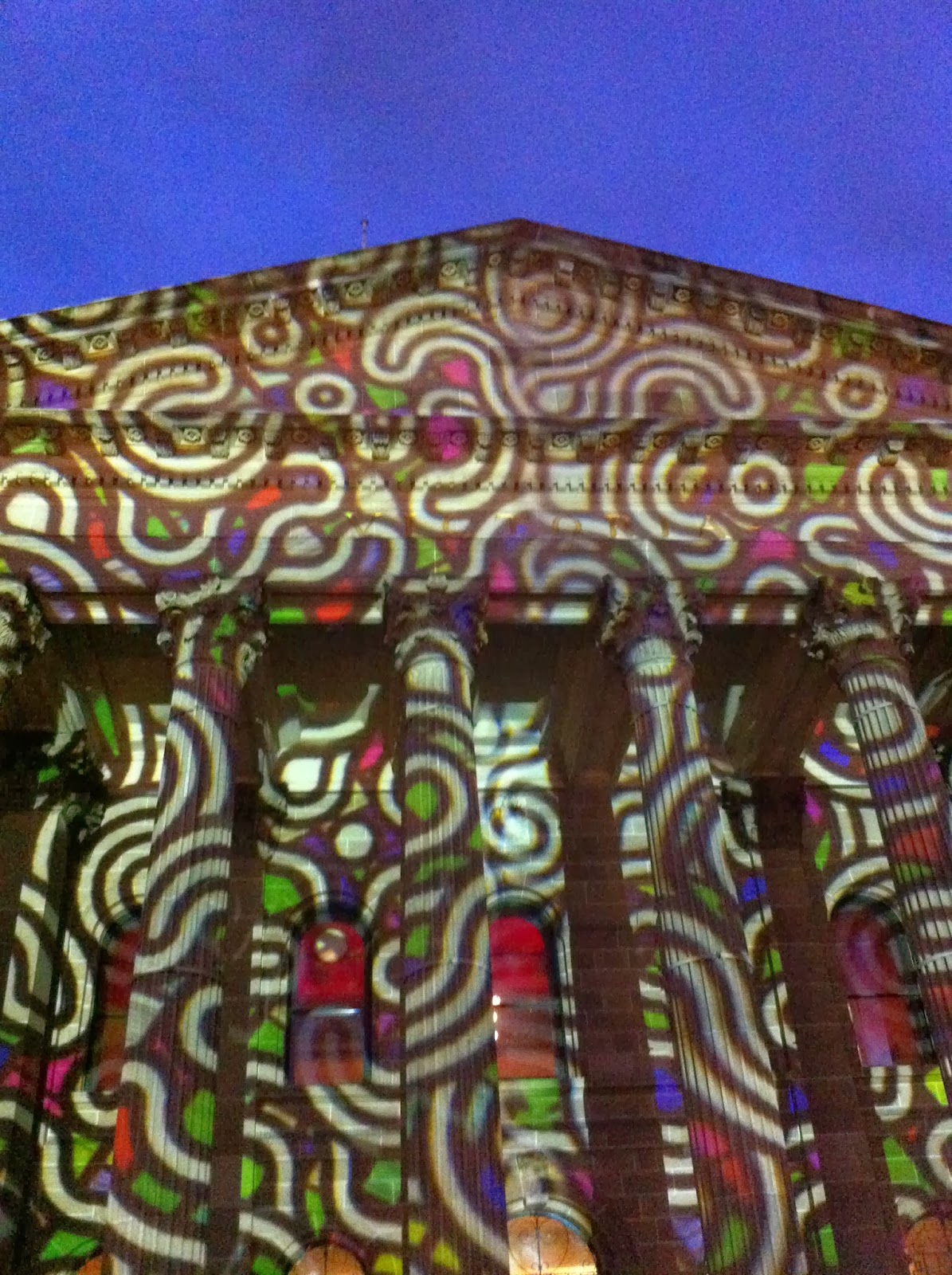 Inside State Library of Victoria
"Virus One Billion Times" 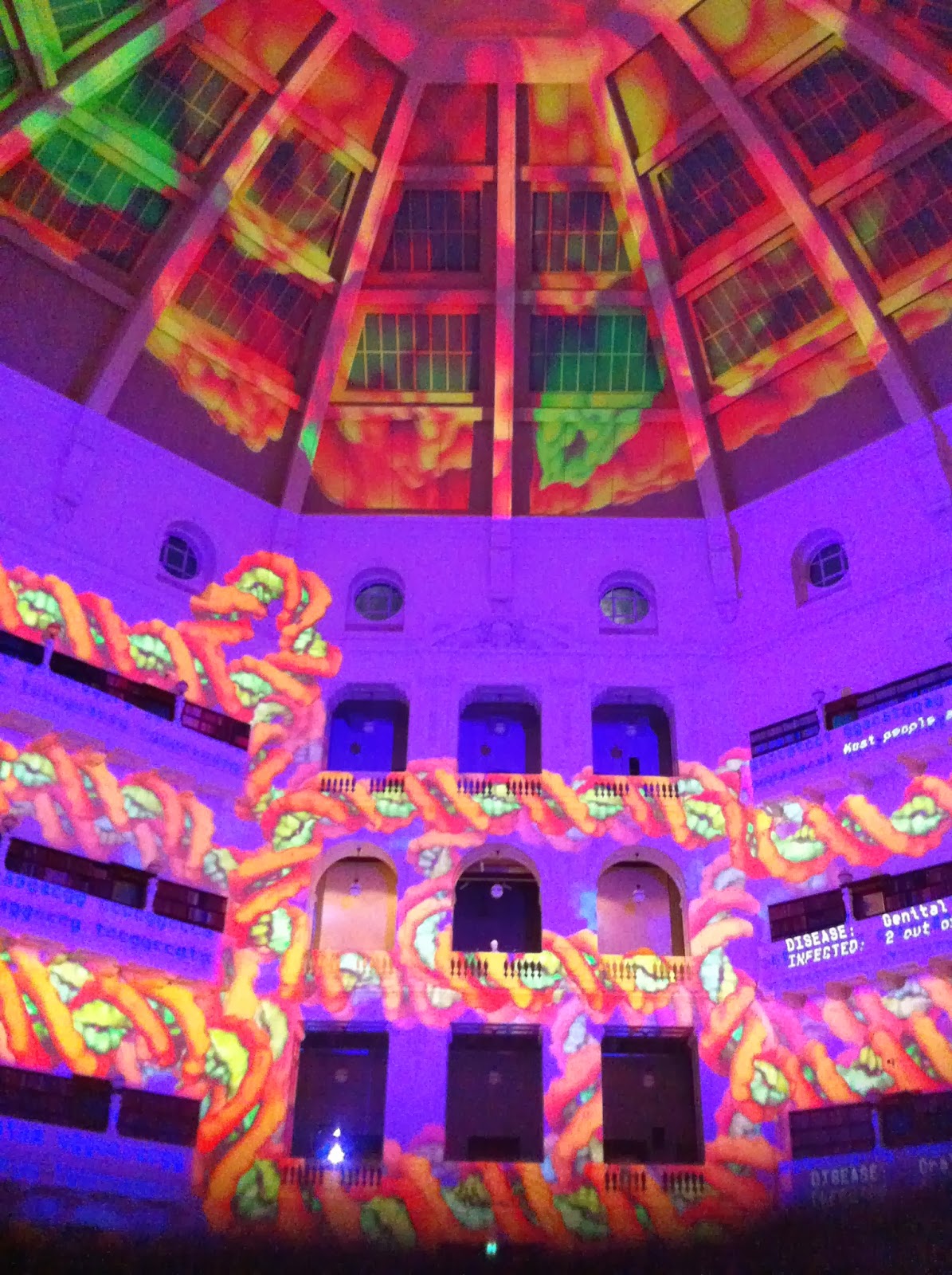 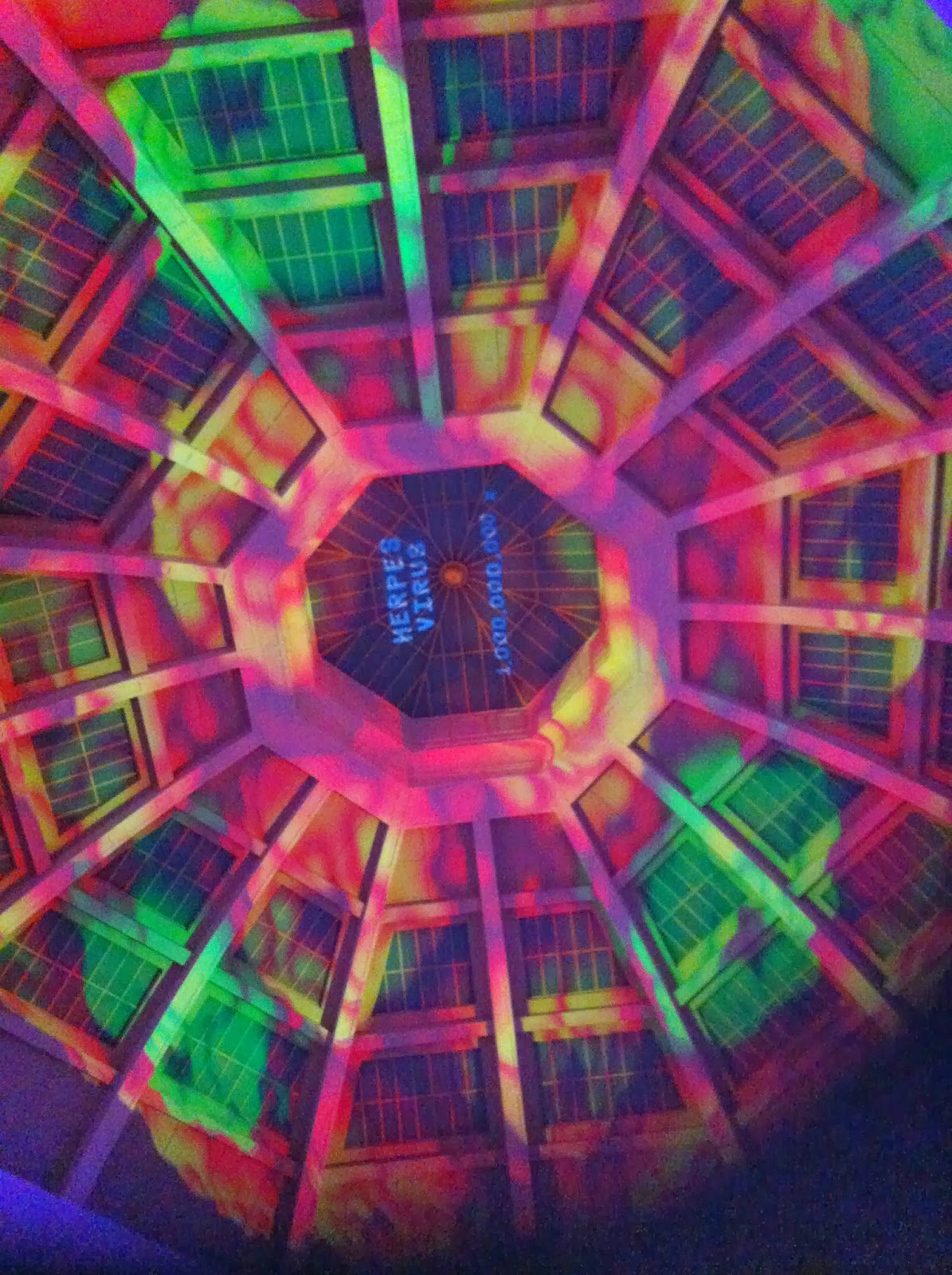 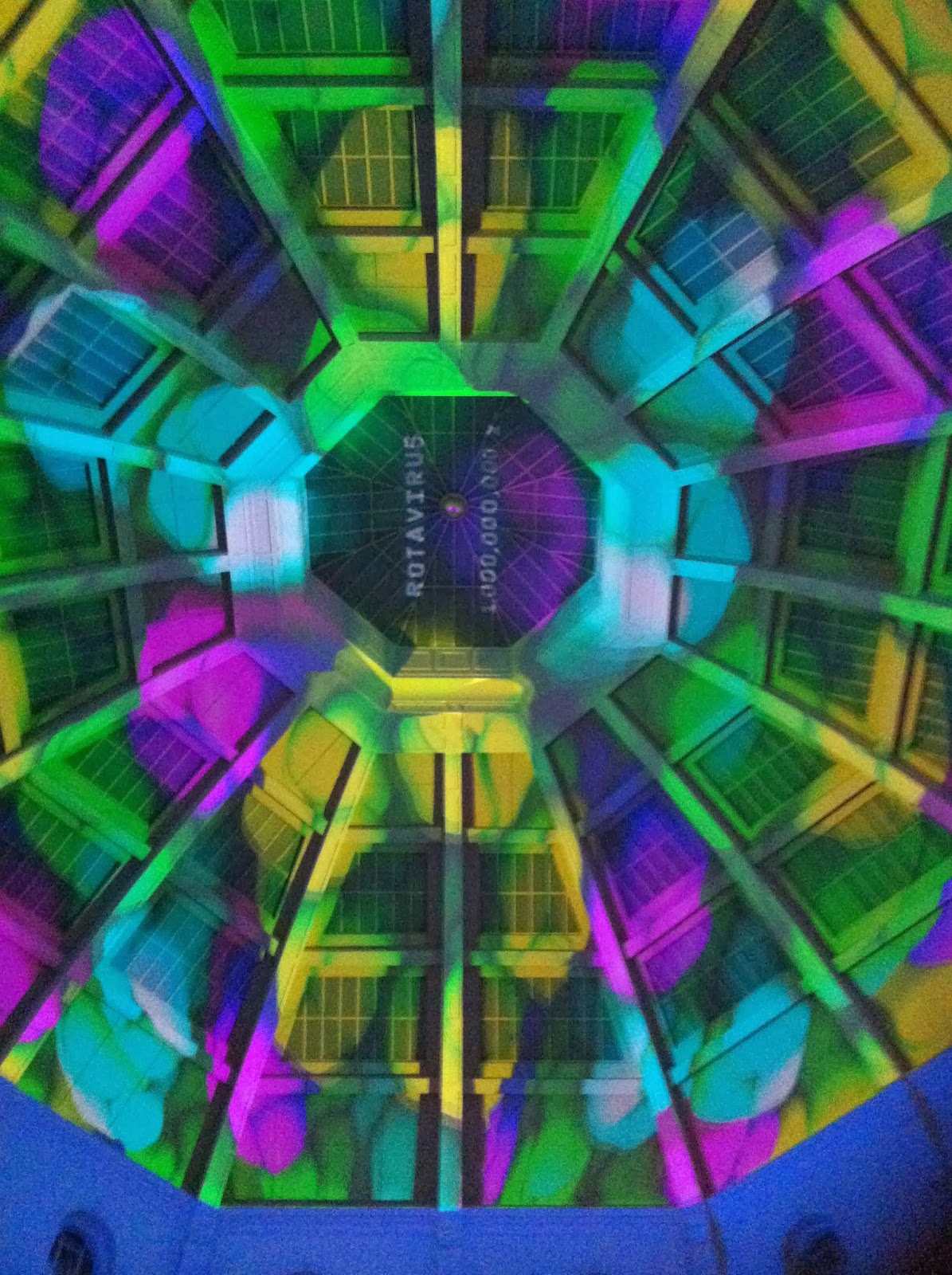 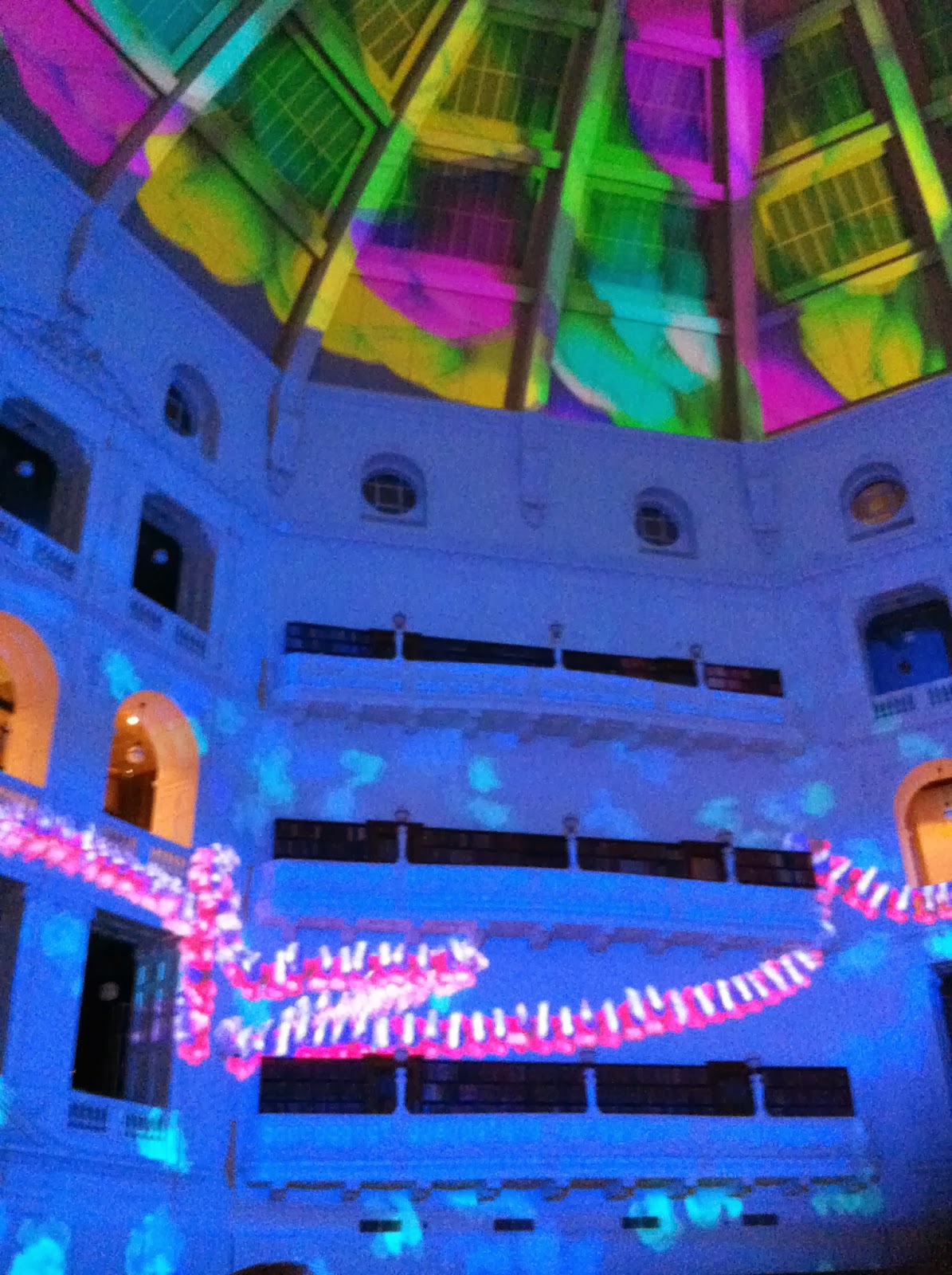 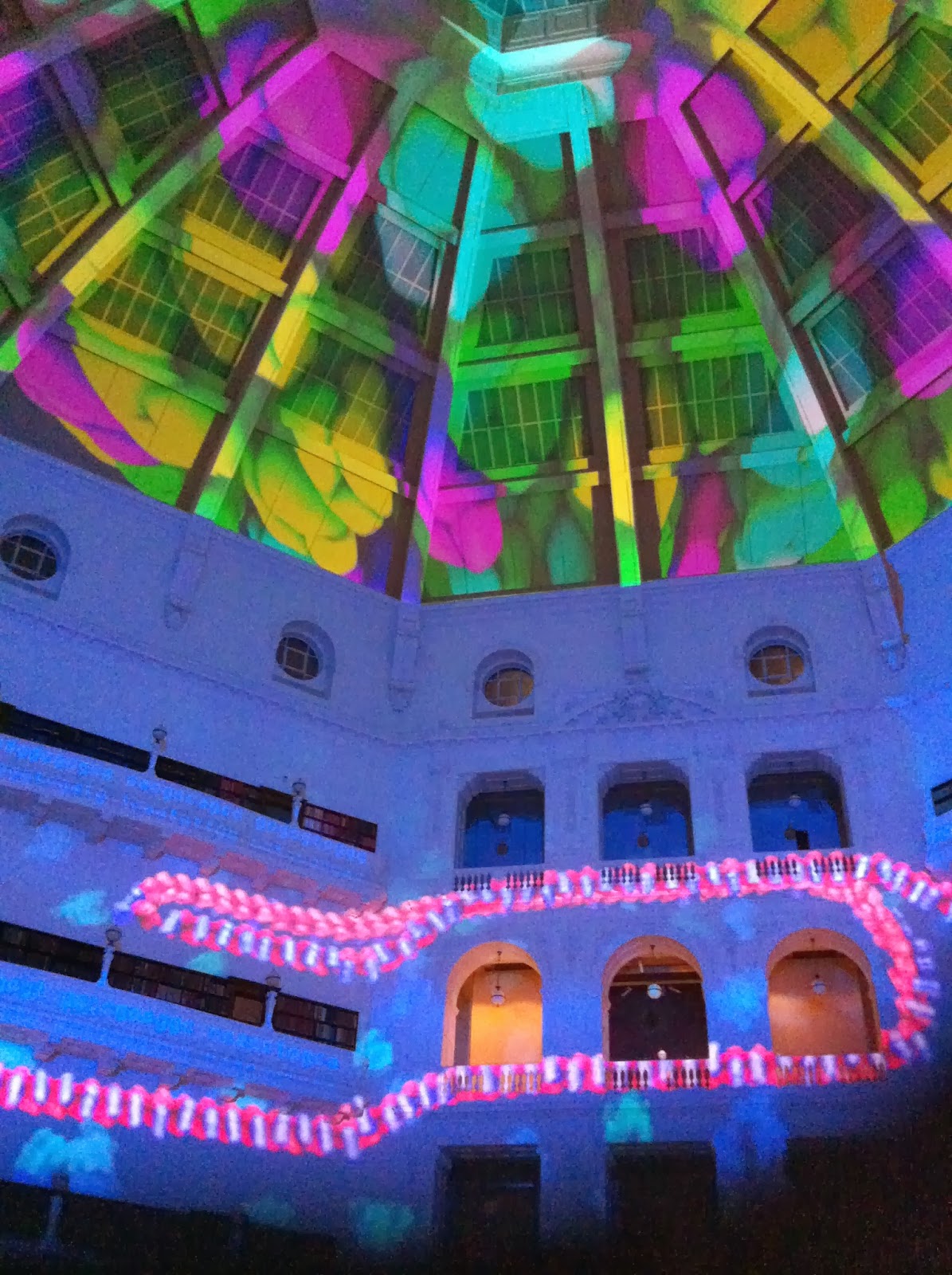 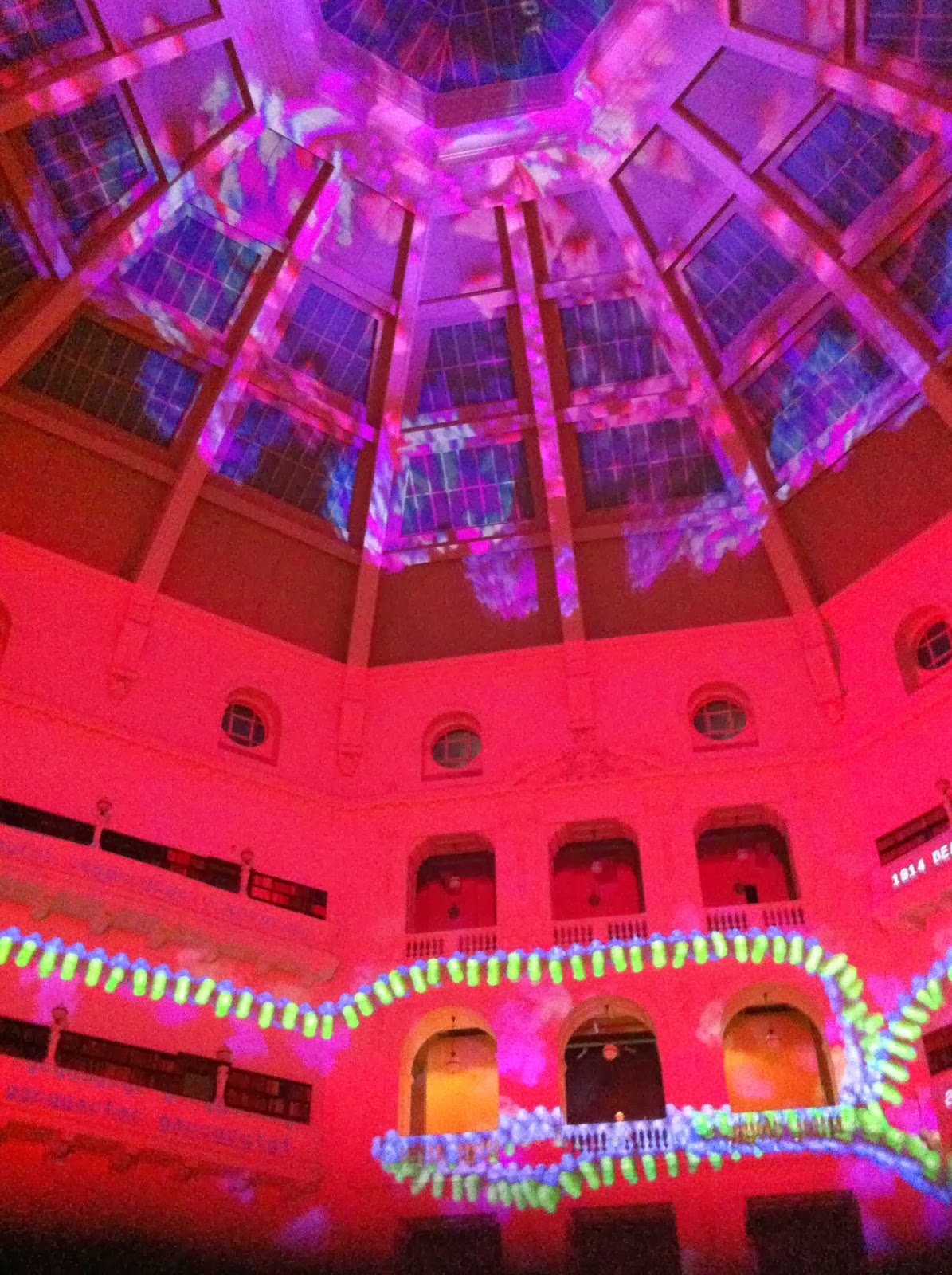 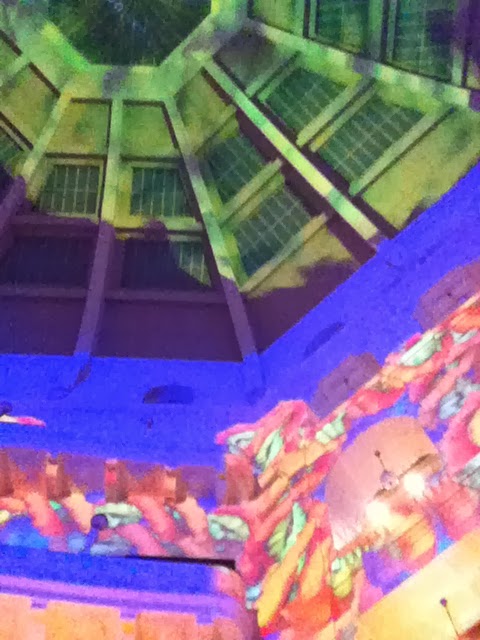 The crowds in Swanston Street 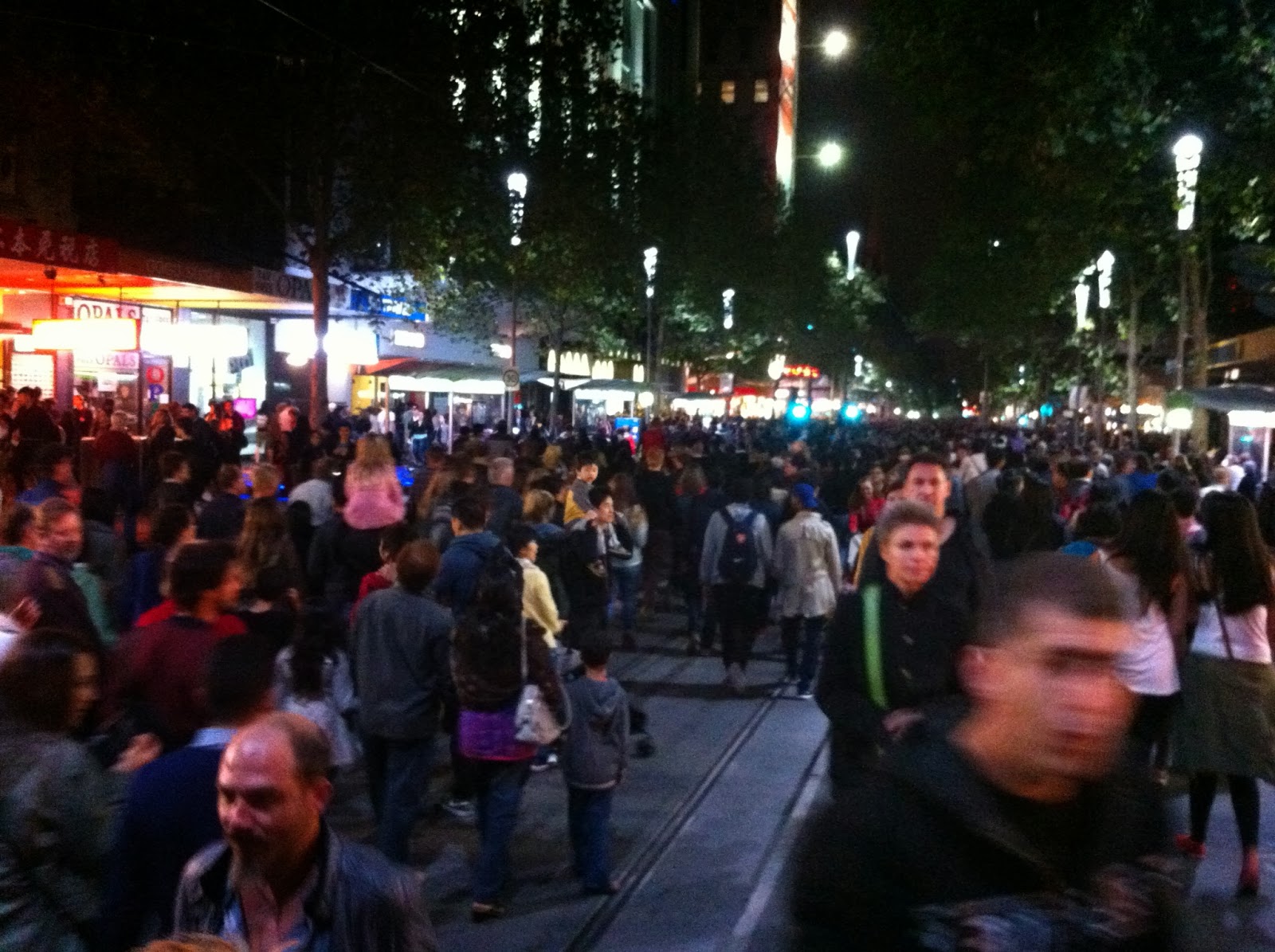 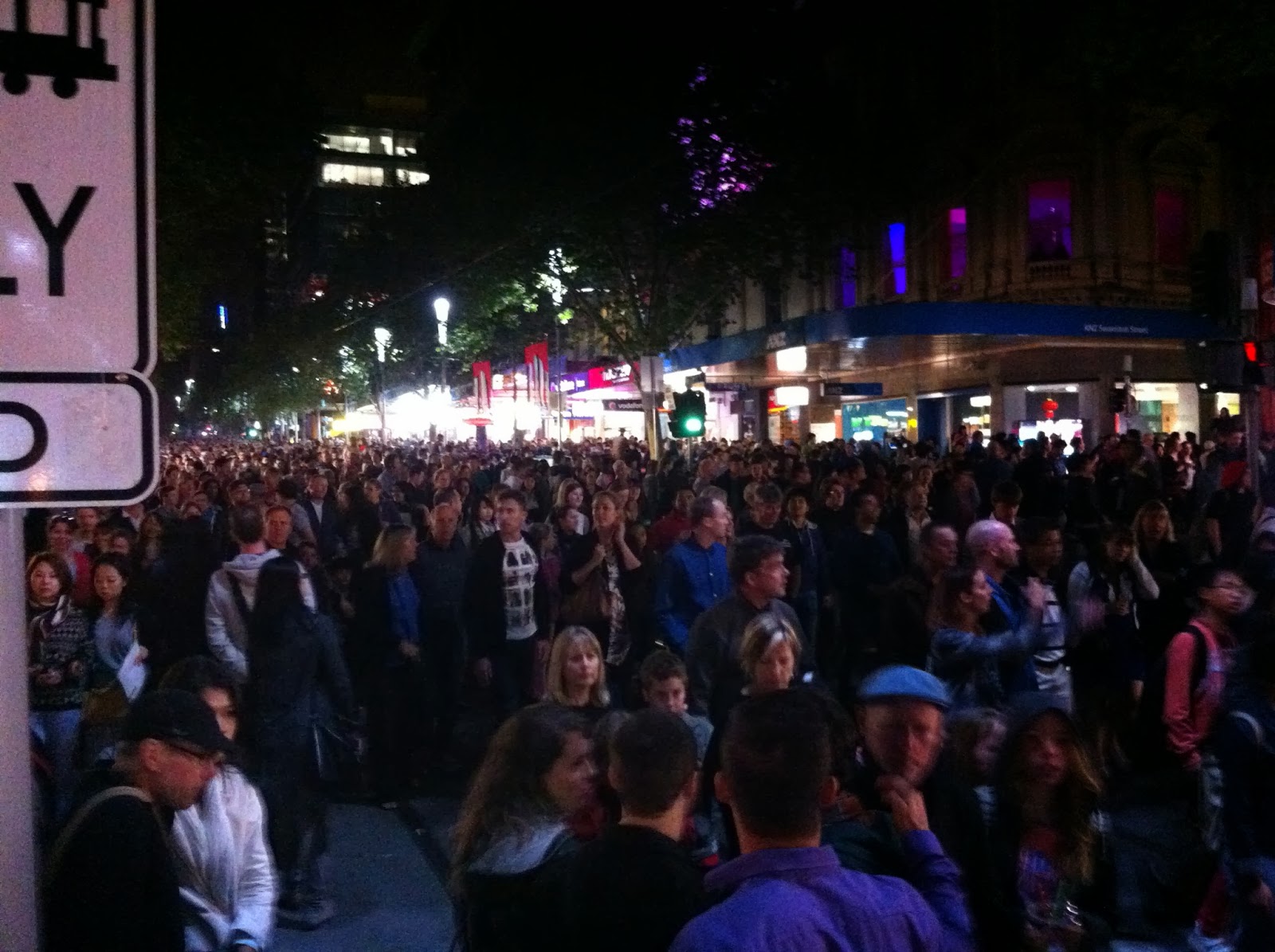 A jazz band in Bourke Street 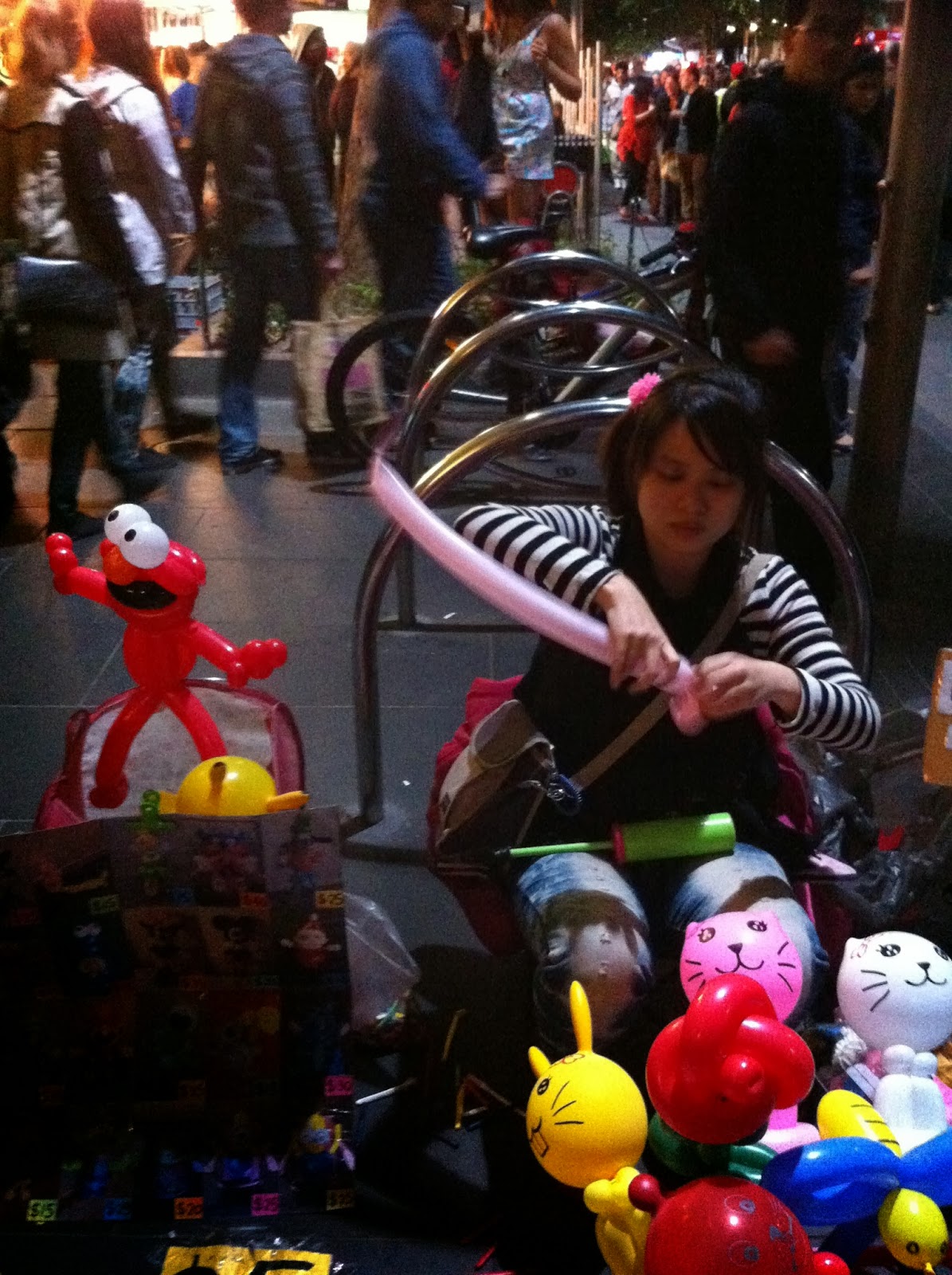 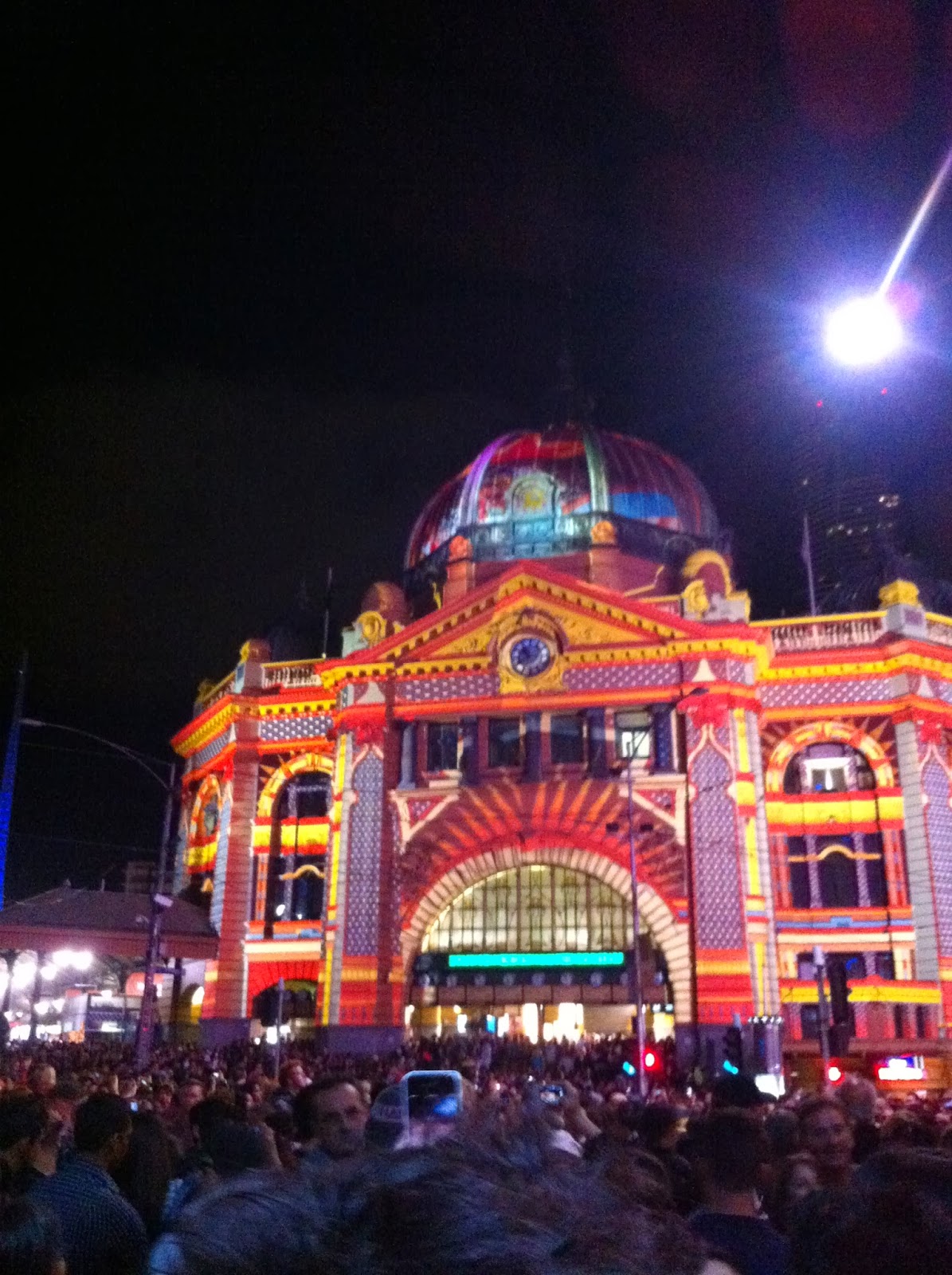 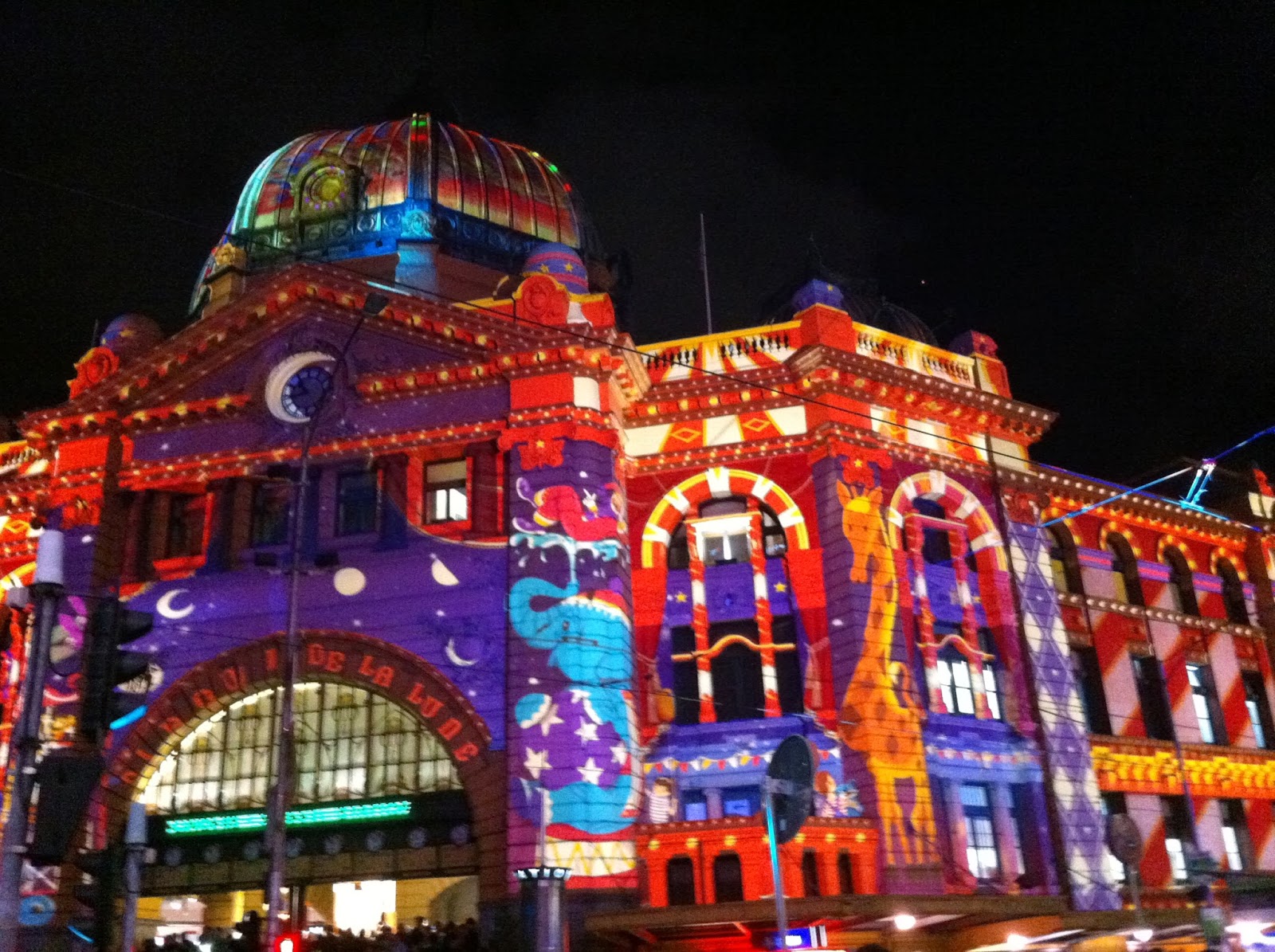 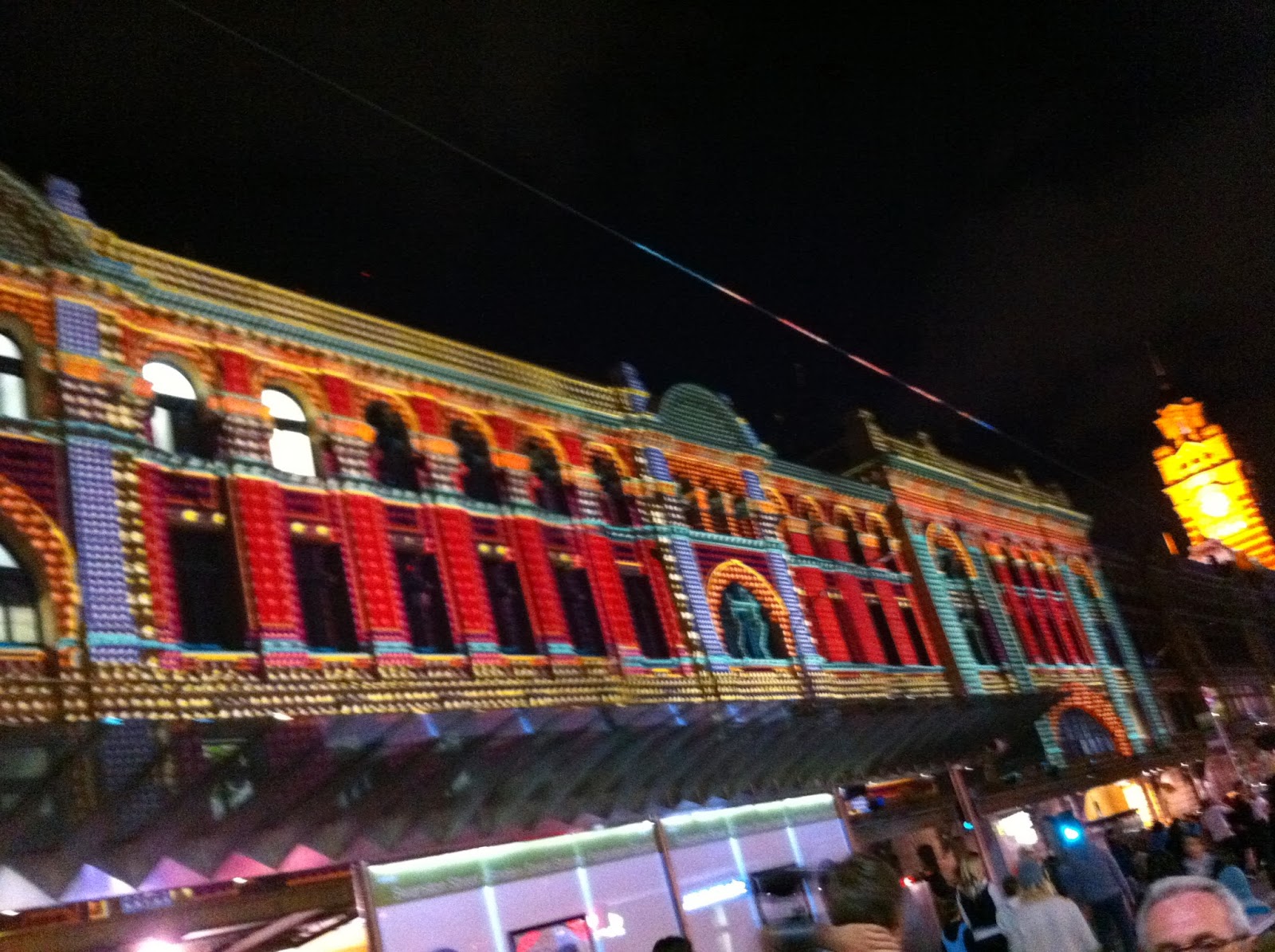