A shout out in favour of marriage equality

I happened to be on twitter when Kyle Pollard, a former Geelong Addy journo tweeted a question:

Marriage. Can someone tell me what benefits there are from marriage? What can you do as a married couple that you can't from a civil union?

I'm a pretty strong advocate for marriage equality, and as an aside, positively seethed when I read crap from Andrew Bolt in the paper yesterday (I'm not going to link it - he doesn't need more numbers to his site) where he suggested that all were equal to marry someone of the opposite sex. So, I took Kyle's original question to be a challenge to the need for marriage equality. It turns out he was querying the whole concept of marriage...I think.

Anyway - I then noticed a reply to him from the Victorian Young Libs President, Aaron Lane, who suggested marriage is about children... so I jumped in again.... I've put the tweet convo's as best I can below. I was bothered by Aaron's pen analogy and did think to mention that 50 odd years ago it would have been unheard of for a blue pen to marry a red pen but I didn't agree with the whole concept of his analogy and didn't want to go down that path. 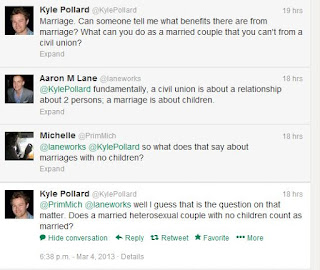 I absolutely believe that marriage is not about children. Yes, many couples who marry have children and some may even marry 'for' the children, but in my mind, marriage is between two consenting adults who want to public declare their intention to be with each other for life. I'd like to think it is based on love and respect but am realistic to know that the world does have pre arranged marriages. 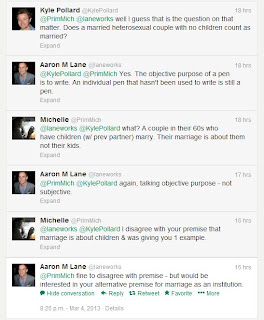 There are many celebrations in life that have evolved over time. Some of them have their origins in religion, some don't. To say we celebrate life events in 2013 the same as they were celebrated in 1913 or 1713 would be wrong.  Society has changed.

For example, I don't attend church. I don't consider myself remotely religious. I have been in a church, I've been to weddings, funerals and christenings. When my husband and I decided that we wanted to get married we chose an open outdoor space for our wedding. We invited the people who are important to us to attend. We included music and words that reflected our thoughts, our relationship and our personalities. We had a celebratory party that went well into the evening. It was memorable and meaningful. We reflect on it as a special occasion in our life together. If we were married in 1913 it would have been different. It would have had to have been in a church. There's not a chance we would have been living together in a house bought in both our names prior to the wedding date.

But we married in modern times, with a celebrant officiating and the people important in our lived in attendance. We loved each other and wanted to symbolise that love with a ceremony with our family and friends as witness. As a man and a woman we had that privilege...but modern times do not currently extend to two men or two women. I have dear friends who are in long term, committed and loving relationships who cant have that same ceremony or celebration, that same expression of love witnessed by their family and friends and I just don't get it. And don't give me that commitment ceremony line...It stands out like a sore thumb as 'different' and may as well shout 'Your relationship isn't as valid as a marriage'.

I realise my words are a small shout out in favour of marriage equality but I truly believe that all the small shout outs will soon sound quite loud and the law makers of our land will realise that love is the underlying argument at the root of marriage equality and depriving a man and a man or a woman and a woman of being able to marry is as silly as not allowing the blue pen to marry the red pen....if that's your analogy of preference. 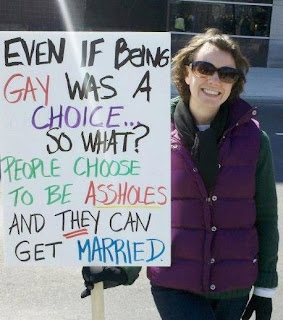 I should  note that I started writing this post several weeks ago and only just finished it...as I post it now so the reference to Andrew Bolt's comments aren't relevant to 'yesterday'...
Posted by Michelle at 11:59 PM