I didn’t watch the game last Friday. I was double booked. Our son recorded it and while we were out we checked our phones throughout the game. Our hearts were racing as if we were at the game itself. As we checked for the final time our hands were shaking and we could hardly believe it was true – we’d won, we’d beaten the juggernaut that is Hawthorn. As the theatre we were seated in cleared out we were the last two sitting there, still staring at our phones, in shock and disbelief as jubilation spread through our very being. My husband had worn his Bulldogs scarf. As we eventually made our way out we enjoyed the cheers, and ‘Go Bulldogs’ from others; mostly Cats fans since we were in Geelong heartland. They were almost as excited as us to see the Hawks defeated.

When we got home we watched the replay – it was 3am before we got to bed.  On Sunday channel 7 replayed the game and then again on Monday. It’s now Wednesday and I have the game on again as I write this. I’m trying to photograph moments as I write about them, straight off my tv screen! High tech blogging this.
Bulldogs fans are daring to dream, but in such a cautious way. Many of us have been here before, and had our hearts broken. We loathe Adelaide with every ounce of our being. The loss in the 97 prelim is like an open, gaping wound that we can’t talk about without choking up. 98 was disappointing too, but doesn’t fester in the memory bank like 97.  Close again in 08, 09 and 10. Would we ever see a Premiership, or even a Grand Final appearance? We still wonder. We wonder with hope in 2016 but we don’t get ahead of ourselves. No-one is talking about next week, no one. We’ve become superstitious – thinking beyond Saturday will jinx everything. So we do everything we can to get a ticket to the game in Sydney on Saturday – it involves travel, it involves battling the archaic Ticketmaster ticketing system, it involves booking the car in for a service, finding a dogsitter and/or a house sitter – making sure the kids who aren’t coming with us are looked after. Finding accommodation – do we take the camper? Organising a day off work for my husband so we can leave Friday. There are mini hurdles every step of the way but we wouldn't give up the opportunity for the world!
As I watched the replay for the 3rd time on Monday I started to notice the fans in the crowd and I saw myself. It has prompted me to write this. All footy fans love their footy but I really feel like we’re a special breed; we share the joys and the disappointments and long for that elusive premiership..

Last year before the elimination final against our nemesis Adelaide, a huge crowd of fans marched to the 'G, and so it would happen again. I watch those fans and feel the joy in their hearts, the spring in their step as they make their way to the home of football. They believe, we believe and we hope. We feel the connection of a common love and a common need to see our team succeed. 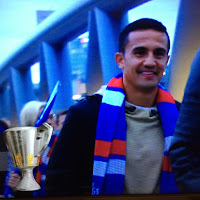 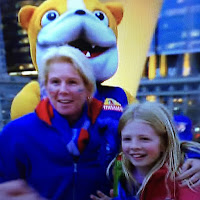 Easton Wood lets out a deep sigh as anthem starts.... we all do.

Now he's revving up the team, we're fist pumping and gritting our teeth with him, willing them to "stick it up 'em" to use the famous Teddy Whitten parlance.

Hearts are racing as Tory gets a free then misses goal – it’s still early, but Tory?? He's our dead eye dick.

That lady with red arms – that’s me – I’m euphoric. The captain has kicked our first goal. Thank goodness.

The goal review after Hodge supposedly touched the ball sends the Bulldogs crowd into meltdown. It's confusing and seems to go against the whole goal review system of footage needing to be conclusive. Hodge gets booed for the remainder of the game, seemingly for that incident.

Finally the ump pulls up the Hawks for shepherding the player on the mark but the fans are confused.  They don't know why the ump is bringing it back but on tv we see that it's because of the shepherd. Sometimes you have no idea what is going on – I’m these people? What just happened? The crowd is confused. Hands in the air guy? I'm him too. 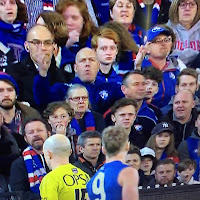 Can you hear the crowd? Can you hear the calls of "Ball"? That’s me, though usually I’m yelling "Caught" – don’t ask me why… It’s kind of a misheard lyric from my childhood that I can’t shake.

The oohs and aahhhs. The run, run, run, run, kick it. Woohooo… YES!  Hard, hard clapping. I’m making all those noises. How good is Picken?

The moment of the game – the absolute moment of the game! How good was it? Hodge bouncing off Bont as Bont marks it. That kid is awesome - he's young enough to be my son so I can call him a kid but truly he's a man - he stands tall in this game and in this team. 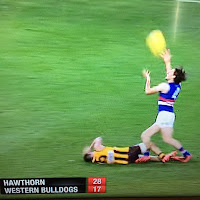 Half way through the 2nd quarter they were double our score, 46 to 23… If I'd been watching live my stomach would be churning, worried, a little afraid. Random stats come up on the screen: Spoils 16 to 10 – It’s the little things – Hunter this time. So awesome.

Point, point…we keep kicking points and then they go coast to coast for a goal,  but miss.  Phew... and then Dunkley kicks a goal – there's a shot of Lin Jong in crowd and we're reminded that some players who should be out there are missing.

Crowd shot of famous fans – we’re all in this together. We’re all Tim Cahill, we're all the bloke who grew up in Barkly St, the Nana who sits with her knitted red, white and blue blanket, the kid decked out in face paint. 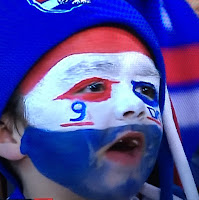 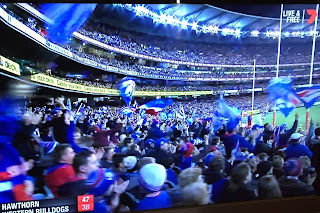 Another chance for Tory – he has the yips and then there’s a blue. I’d be on my feet here. My hands would be clutched as I hoped no-one got hurt.

Half time - only one point to difference... (Flashback to me in the theatre checking my phone - the last time I'd checked we'd been 23 down, and now my son has sent a message to say 1 point down. I look at my husband, he looks at me, we say nothing but in both of us is silent hope, a silent 'maybe')
The third quarter starts... there's a second goal review and from what I can see, a second inconclusive decision overturning a goal but it squares things up.

Stringer goals to put us in front. I'd be absolutely bouncing out of my seat by now. Jordan Roughead has a couple of chances in front of goal. That guy with the beard - that's me, that girl clutching her drink - she's me too. I'm excited, I'm nervous, I'm hopeful.  He goals! The crowd are on their feet - I'm on my feet. 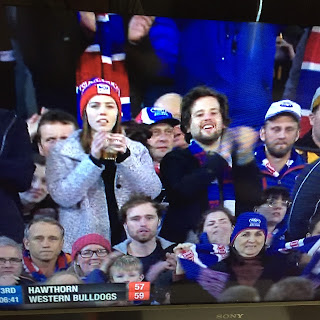 Now Toby Mclean goals and there is serious fist pumping. Yes, Yes, Yes. We have a 14 point lead. We're daring to dream.  As Stringer throws the ball on his boot you see it sail through the goals and you see the bulldogs' crowd rise as one. I think we're in a trance. It feels so unbelievable. There is disbelief on the faces in the crowd. We so want this to happen and it is.

The chant 'Let's go Bulldogs' starts to ring around the ground. We're clapping hard, we're yelling the chant, we're so excited we might burst. Bont goals. That girl with her hands going up to her mouth - that's me. Oh.My.God, we're winning, we're dominating, we're taking down the reigning premiers. 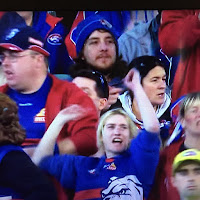 The final quarter - can we do it?
Bont intercepts in front of Hodge, passes to Dickson and goals. There is determined clapping in the stands - if I clap harder we run faster, we goal more, we will just do better. My clapping will get us over the line - I clap with all my might. 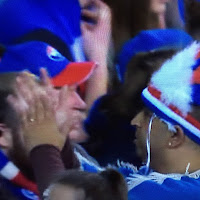 The commentator Cameron Ling suggests that the fans believe now. We're bulldogs fans - we love our boys but we never feel a game is won this early in the final quarter. We believe but mostly we hope...

The crowd is seriously invested in every moment of the game - every mark is greeted with an enormous cheer.

Picken goals and high fives some fans on the fence - he's euphoric and so are we - we're reaching our hands out, we are with him with every stride he takes, every tackle, every moment of desperate determination. We're bouncing in our seats.

Then Picken goals again. His goals are scrambling, desperate goals and this one is the sealer. You see it in the celebrations with his team mates - they know they've got this and I think we all let out a long held breath. 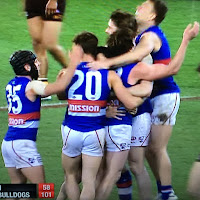 In the crowd a Hawthorn fan holds up 3 fingers to jeering, excited Bulldogs faithful. He's letting them know his team has won 3 in a row. We know, oh how we know, but we also know that there wont be a fourth - we will deny the Fourthorn, the 4peat... 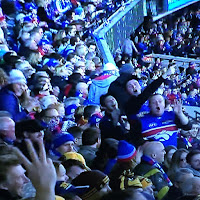 I see a girl in the crowd with her hands over her face and she makes me tear up - I'm her. I'm so hopeful and optimistic and in shock; feeling joy and excitement and a tiny smidge of confidence. We long for success, for a chance for our team to see victory, to break the decades long drought.

Hawthorn keeps coming. Bruce and Denis seem to think they're still a chance, and in days gone by they may have been but we're composed. We wind the clock down. Caleb is awarded a free and there's a shot of our President and Vice President in the players race; hands in the air - jubilant. They love their doggies as much we we do, we've all got our hands in the air.

The players on the interchange bench are arm in arm. We all feel this jubilation.

And as the final siren sounds and Caleb slots a final goal there is much fist pumping. 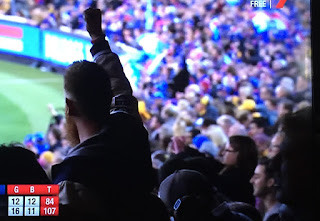 There are shots of Bevo and the coaches box, our injured captain Bob; the heart of our club, club legends like Bubba Smith, Chris Grant, Gia - all still very much a part of this club. Joy beams off faces; players, fans, officials. It is just pure joy.

The players share their excitement. They run around the fence line high-fiving the fans - joy is being passed from player to fan to player.

They go down the race - the fans are reaching desperately to touch their heroes and they're reaching back - there's this connection - this is for all of us.

Around the country, as our banner had suggested, 24 million people are smiling. Hawthorn, you were amazing for 3+ years, but now it's our turn...
"...You can't beat the boys of the bulldog breed, we're the team of the mighty west." 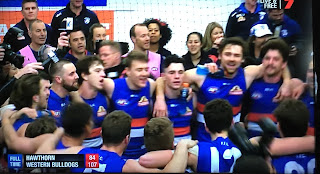